Island life certainly has a unique charm and a way of spiriting us away from cities that we call home. From the Mediterranean sea and beyond, our list of best European islands for every traveller is your much-needed dose of inspiration for your next adventure (no matter how you roll).

Read on to find out where to go.

1. Best island for the party-lover: Ibiza

I love that it has so many varied places to go and things to see – you don’t just have to be an avid clubber or raver to enjoy Ibiza! You can tour around the island checking out all the beautiful beaches, you can book boat trips, watch the sunset at Cafe Mambo, see the history of Ibiza at Ibiza Town, or dance during the daytime at Bora Bora beach! And of course, if you are into dance music, you’re spoilt for DJ’s at the many clubs dotted around the island (San Antonio especially). I’d recommend that if you wanted to experience both the pretty side and the party side, look to stay in a nice hotel at Playa D’en Bossa. It’s much more relaxed and cleaner than San Antonio, but it still captures that busy Ibiza vibe. If instead you wish for a quieter Ibiza experience, look at places such as Santa Eulailia – a gorgeous resort. – Emma, What Emma Did

It’s no secret that Ibiza offers one of the most INSANE clubbing experiences in Europe, which is, of course, why it made our list! A visit to this island is a must-do for any true music fan. Whether you want to travel on a budget or hang out on a private yacht with the rich and famous – there is something for everyone. We definitely recommend visiting in September for all of the season closing parties.

Ibiza has more than just nightlife to offer though, with beautiful hidden coves and endless boating opportunities, Ibiza is just as much for the party-goer as it is for the low key holidaymaker. This island also gets an added bonus of having a little sister – Formentera, which is great for an overnight or day trip and is big enough to cycle your bicycle around in one day.

I love the mythology of Ibiza – from the talk of the lost city of Atlantis being down a cliff-face that can only be accessed after you’ve seen three sunrises, to it being the ruling land of Bes, the ancient god of dance – and general bacchanalia – and all the belief of magical leylines.
What I enjoy most is chilling in the naya of a finca by a pool with really good friends who make me smile from one end of the island to the other – before heading into the night, or day, to people watch, listen to music, and walk on sand. There are too many gorgeous spots to name!

For a first time traveller, I’d say don’t get too stuck into being at the right place with the right DJ – just take a cruise around Ibiza Town, somewhere cheesy can be as much fun as somewhere swanky, eat well, go with the flow – stay up all night – and swim. – Kirsty, Kirsty Allison

Once a home to the famous Knights Templar, Malta has a long history which has bred a rich modern culture including a population that speaks both Maltese and English, a unique cuisine and a vibrant capital city with world-famous nightlife.

The little archipelago consisting of three islands is lesser known to most visitors and is a perfect escape for the well-rounded traveller. Swim in crystal-clear Mediterranean waters all year-round, explore medieval towns or hike one of the many coastal trails. The choice is all yours!

As the second largest island in Italy, Sardinia has it all. From white sand beaches, clear blue waters and all the things we love about Italy including food, wine, history and a laid-back lifestyle are just a few of the reasons to visit. Sardinia ranks very high in the ranks of quality of life and is often likened to California. They have one of the highest rates of centenarians after the Japanese island of Okinawa. Impressive, right?

The winds that blow along the Sardinian coastline are a haven for sailors and windsurfers, while the clear waters make water-skiing, diving and stand up paddling a divine experience. Don’t miss out on sipping the famous Vermentino, a local white wine, perfectly suited to an afternoon in the sun and a perfect match for indulgent lunches.

One of the lesser-known islands of the famous Cyclades, Antiparos will have you kick into chillax mode as soon as your ferry docks at the little harbour. Popular with European holiday-makers, you’re best off selecting one of the many little family-run accommodations on the island.

Restaurants offer little outdoor tables on the whitewashed narrow streets, coloured by purple bougainvillaeas, a perfect place to sit over mezze with your travel partner, enjoying life at your own pace. Local boat companies offer private trips to neighbouring deserted islands where you can really disappear from the chaos of modern life.

5. Best island for the escapist: Greenland 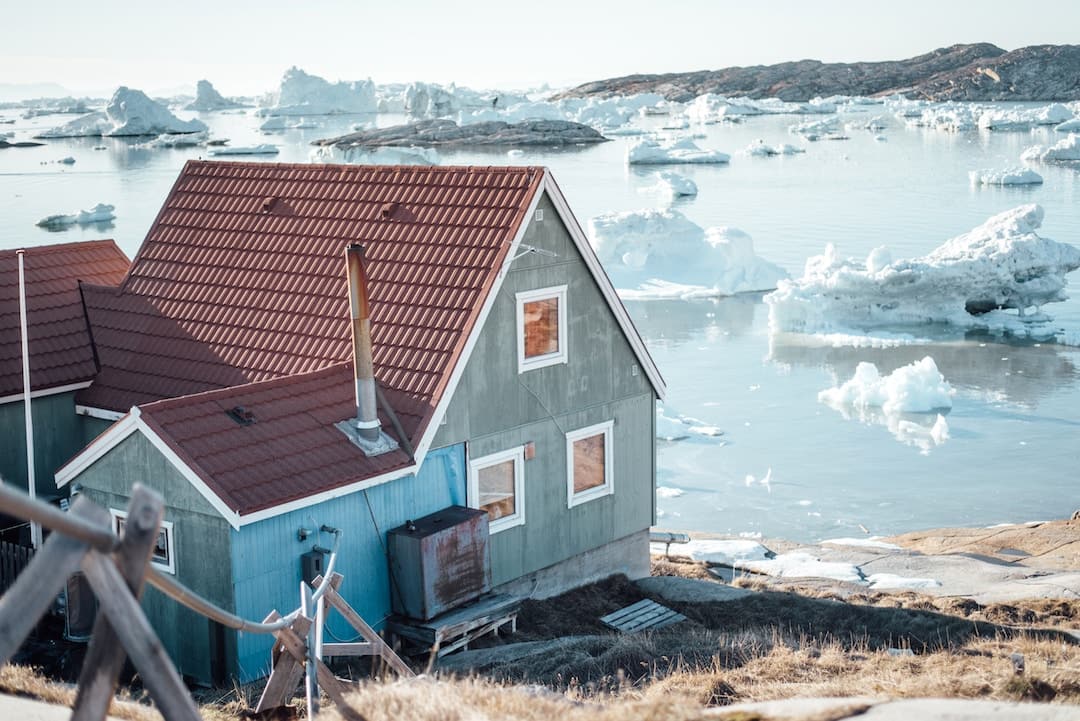 Still largely unknown to many travellers, Greenland allows the visitor to lose themselves in a vast, wild landscape. Being the world’s largest non-continental island and holding the title for the country with the world’s sparsest population, Greenland is one of the rawest, unspoiled and most beautiful islands Europe knows, making it perfect for the ultimate escape.

With only 150 kilometres of paved roads in the entire country, more Greenlanders own boats than they do cars, as the country is best connected by water. Cruising past icebergs, remote islands and flowing mountain waterfalls, don’t miss an opportunity to go deep sea fishing for Arctic Redfish or Cod.

Then, have a friendly local show you how to cook your catch over a traditional Greenlandic barbecue. Hiking trails are also abundant, and don’t worry about carrying too much water as Greenland offers countless springs and waterfalls where fresh, glacial water is there for the taking.

Located off the Moroccan coast, the Portuguese island of Madeira is also known as the Island of Eternal Spring and is a great option for an affordable getaway at any time of the year. A rocky landscape of steep cliffs that jut out of the Atlantic ocean, what Madeira cannot offer in the way of beach life, it makes up for with dramatic Atlantic scenery.

The warm climate in Madeira is perfect for the cultivation of exotic flowers and tropical fruit and vegetables ripened to perfection, which can be enjoyed by visiting the farmer’s market or one of the islands many local restaurants. While an ocean-front hotel in the capital, Funchal, is a good option, you might prefer to get amongst rural life with a stay in an aristocratic country house, many of which were linked to the old wine trade.

7. Best island for going back in time: Inishmore of the Aran Islands

Good for a day trip, but perfect also, for a longer retreat. Inishmore, the largest Island of the three Aran Islands is home to ancient ruins dating back as far as 1500 BCE and modern-day locals who still live life like it used to be. With only one supermarket and one cash machine on the island, life on the Aran Islands is a safe place where local children can still explore their island unsupervised.

A day on the island is best spent exploring the few roads by bicycle or even better, by horse-drawn cart, where your local host will humbly share an insight into local life and the history of the island, with true Irish charm. A longer stay on Inishmore in a local Bed & Breakfast calls for time to try your hand at local crafts or take some time to learn the ancient Celtic tongue of the locals and their ancestors. 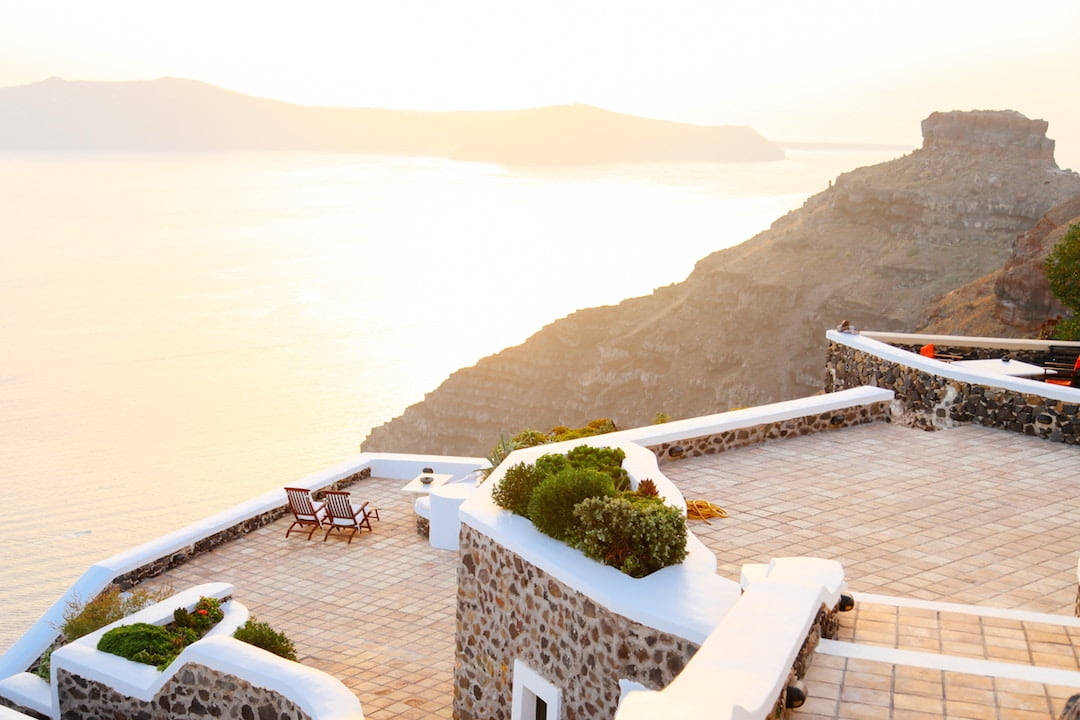 Watching the sun nestle into the horizon at the end of the summer season, when a long-awaited calm comes over the island… sipping on a cool drink surrounded by white-washed buildings and blue domes, while local cats bask in the last sun’s rays before night falls… All while perched on the edge of an ancient volcano. How can you not want to go to Santorini?

See Also: 2 Weeks in Greece For Every Budget

While this beloved Greek island is on many a bucket-list for its unbeatable dusk scenery, be a little smart with when you go and your experience will only be richer for it. Avoid peak summer when crowds can inadvertently steal away the magic and stay longer, allowing time to explore the island and its lesser-known villages and beaches.

Comprised largely of pine forests and natural lakes, the Croatian island of Mljet is mostly National Heritage and offers exceptional scenery with a tranquillity that cannot be found on its neighbouring islands. Exploring the island, you’ll find endless hidden swimming spots and quiet hill-tops where you can escape from the world for your own little piece of calm.

Not completely uninhabited, the island is home to a handful of small villages where locals can help you find a room or apartment to rent or a good place to eat. A vacation on Mljet will be the closest you’ll get to having your own island paradise in the Mediterranean.

10. Best island for the adventurer: Iceland

From active volcanoes to unusual cuisine, Iceland is the perfect escape for someone looking for something a little more adventurous than a week on the beach, sipping cocktails. Born from volcanoes and glaciers, the Icelandic outdoors offers a range of activities including kayaking between fjords, horseback riding on ancient highland trails, ravine snorkelling and glacier walking.

For the less adventurous but avid nature lovers, this island nation is also home to natural wonders such as frozen waterfalls, exploding geysers, thermal hot springs, puffin colonies and the world-famous Northern Lights. Tourism is steadily picking up for this island of the north, but with plenty to do all year round, there is never a bad time for an adventure in Iceland.

11. Best island for myths and legends: Isle of Skye

A dramatic and mysterious landscape of mountains and lochs, the Isle of Skye is the northernmost of the Scottish Hebrides and perhaps one of the better-known islands of Scotland’s north. Although the Scottish weather can be changeable at the best of times, the long sunny days typical of peak summer are only half as atmospheric as an overcast October day, the clouds casting dark shadows across the rugged landscape and trickling streams.

There is plenty to do in Skye, from visiting one of the old medieval castles to learning of the history of the Clans MacDonald or MacLeod, to discovering hidden fairy pools and the grassy valley known as Fairy Glen. The picturesque capital, Portree is home to a small port of fishing boats and a short drive away is the well-known whiskey distillery of Talisker, which after a tipple, only adds to Skye’s intrigue and legend.

See Also: 50 Fabulous and Free Things to Do in Europe

Finally settled down in Vienna after 9 years of leading tours in Europe, Leona first joined TourRadar in 2016. She speaks four languages and enjoys cooking authentic traditional recipes, walking in the hills around Vienna and arranging beer coasters so they're all facing the same way.

India Vs Sri Lanka: How to Choose the Right Destination For You

India Vs Sri Lanka: How to Choose the Right Destination For You