Spain is a destination often underestimated by travellers. Sure, you might expect it to be ‘pretty’, but this European country is filled with breathtaking sites at every corner.

As a year-round destination, it’s always a good time to visit Spain, but the green mountains of the north are worlds away from the old Moorish Kingdom of the south, so read further to pinpoint the perfect spot for you.

What type of traveller is Spain suited for?

Regardless as to whether your a foodie, a modern art fan, a romantic, a historian, an outdoor enthusiast or a party animal, Spain boasts endless options in the north and south. As the second largest country in Western Europe, you need to be prepared for lengthy periods of travel to get around. Spain is also likely a challenging destination for people who like an early night sleep as many cities never stop!

See Also: Two Weeks in Spain for Every Budget

Can I travel to Spain solo?

Yes, absolutely! You certainly can travel solo (and safely) so long as you take the regular precautions you would at home. Pickpockets are very active in places like Madrid and Barcelona, so it pays to be extra careful with your belongings while out and about. For the most part, you’ll get by just fine speaking English which makes it an attractive destination for native English speakers. On the other hand, there is little more rewarding than learning a new language so read up beforehand and hit the ground running! Ole!

Or, if you’re still unsure about travelling solo, there’s always the option to join a group tour for greater peace of mind and a hassle-free experience. Plus, you can meet other solo like-minded travellers. It’s a win-win!

Why you should visit Northern Spain

Aside from Barcelona and Pamplona, the rest of the north is largely unknown to most visitors. Barcelona barely needs an introduction, as it is a lively city that never sleeps and is a hot-spot for night owls and beach-goers.

The rest of Northern Spain, however, is comparatively an oasis of calm filled with mountains that attract hikers, mountain bikers and adventure-sport enthusiasts. Then, there are the mountains of Navarre and Aragon dotted with castles and walled medieval towns, a reminder of the Catholic strongholds during the middle ages. Of course, there are many reasons why you should visit Northern Spain, and this is just the start of your bucket list.

Continuing west along the coast, you will find:

This is where green mountains plunge into the sea, where small fishing villages continue to enjoy life at a relaxed pace. Need we say more?

See Also: 10 Foods from Northern Spain That Will Leave You Drooling

What type of traveller should visit Northern Spain

If you’re into trying new flavours, Northern Spain is for you. Txakoli sparkling wine in the Basque lands and Sidre (cider) across the north are both popular drinks you’ll want to try alongside your pintxos (small, shared platters), or for the more mature palate (and wallet), there’s the wine region of Rioja and a solid list of Michelin-starred restaurants featuring world-famous chefs.

The north of Spain is also a perfect destination for people who enjoy nature and quiet getaways, and those who prefer driving holidays.

While Barcelona is popular year-round, peak summer should be avoided (where possible) due to the crowds. Winter offers mild temperatures and reduced hotel rates, leaving early spring and late fall as the best times to travel. Madrid is generally much colder than Barcelona in the winter as it’s perched on a plateau almost 660 metres above sea level, so is often cooler in the summer than Barcelona.

September is harvest time in the vineyards which guarantees endless festivities, including the battle of wine in Haro. While the mountains see heavy snowfall in the winter, nestled by the French border at the base of the Pyrenees, San Sebastian offers a mild climate year round and even opportunities to learn to surf! Most importantly, it’s well worth checking out the festivals that are happening during your travel dates as the Spanish love an excuse for a party.

It’s likely you’re more familiar with the hot spots of Northern Spain than you realise. You may or may not be familiar with the Camino de Santiago, a pilgrimage to the burial site of St James himself. We’re almost certain your camera will get as much of a workout as your legs wills.

Let’s not forget Toledo, the medieval city painted by El Greco and Spanish capital during the middle ages, just an hour south of Madrid. In 1986, Toledo was declared to be a UNESCO World Heritage Site (just in case you needed another reason to go).

From Las Ramblas where you can watch the world go by during the day or tasting your way through some of the best food you might ever encounter, Barcelona stands out as a must-visit destination in Spain. Barcelona is the where you will find many of Gaudi’s masterpieces, while day trips from Barcelona include Montserrat and various museum’s of Salvador Dali’s work.

Heading inland, Madrid is one of Europe’s most underrated capitals and is home to some impressive art galleries and museums. For a glimpse into the lives of the royals, look no further than the Royal Palace in Madrid or check out the vintage stores and flea markets such as the El Rastro Market in La Latina.

Cuenca the town of the ‘hanging houses’ along with Segovia where you can stand under a perfect Roman Aqueduct. If you’re short on time during your Spanish adventure, we can assure you won’t regret a detour (or extended stay) to Cuenca.

Why you should visit Southern Spain


Southern Spain is where all of the Spanish stereotypes come to life. Almost completely absent in the north, the south of Spain is home to Flamenco, paella and rustic tapas dishes and raciones to share.

Balmy summer nights see women fanning themselves with colourful fans, sipping ice cold sherry, while sounds of locals playing flamenco on Spanish guitars fill the air with music. This alone is reason enough to visit Southern Spain, it’s like stepping onto the set of Carmen!

What type of traveller should visit Southern Spain

Travellers interested in history will be enthralled by the stories that built the south. Founded by Romans and then ruled by Islamic Moors over 800 years, Andalucia is a living tribute to Moorish heritage with its Alcazars, Mosques and whitewashed hilltop towns, threaded by winding, cobblestone streets.

Like most of the Mediterranean, the pace of life here is slow, mostly because it’s too hot to be in a hurry! If you enjoy afternoon naps and long evening strolls, look no further – Andalucia is your next destination.

See Also: Best Up and Coming Summer Destinations in Europe

The weather in the south is warmer than the north, meaning the only time of the year you really should avoid, are July and August. Seville is the hottest part of Spain, frequently seeing summer temperatures rise to 45 degrees. While the coastal towns of Malaga and Cadiz are cooled by evening sea breezes, for anyone who suffers in the heat – this is not the season for you. October and November are good options and off-season which is a plus if you’re wanting to visit the sights.

Alternatively, March through June are also great months to visit, allowing you to enjoy the buzz of the summer nights while avoiding the summer’s peak. Winter is quiet in comparison but notably warmer than northern Europe and a great option for an affordable winter break getaway.

The last stronghold of the Moorish Kingdom, the most visited site in southern Spain is the mystical Alhambra. Well worth a guided visit, the Alhambra tells tales of Califs and their harems, exotic foods and bloody battles against the invading Christian forces.

Equally as impressive is the Mezquita in Cordoba, once upon a time, a mosque so important it was second only to Mecca. In fact, the whole city of Cordoba, often overlooked in favour of Seville and Granada, was in the 10th Century, a city where Jews, Christians and Muslims all lived in peace, sharing knowledge and customs, one man to another.

Seville was the centre of the victorious Isabelle and Ferdinand, credited for completing the Reconquista and banishing the Moors once and for all. Well worth noting is in the same year, they managed to fund Columbus’ first voyage to the New World which eventually saw unimaginable wealth arrive by the shipload which can still be seen today in the striking colonial architecture of the old town and the massive Gothic Cathedral in the town centre.

Spain is ready to host your visit whenever you are ready to come, summer or winter, amongst nature or in one of her many vibrant cities. Bring a laid-back attitude and an empty stomach and you’ll fit right in, North and South.

Tell us below, where would you rather visit in Spain? 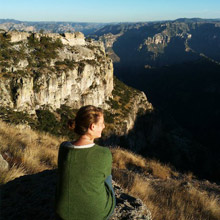 Finally settled down in Vienna after 9 years of leading tours in Europe, Leona first joined TourRadar in 2016. She speaks four languages and enjoys cooking authentic traditional recipes, walking in the hills around Vienna and arranging beer coasters so they're all facing the same way.

Group Tours Vs Solo Travel: Which Travel Style is For You?

Group Tours Vs Solo Travel: Which Travel Style is For You?