International Women’s Day is a global celebration of the social, economic, cultural and political achievements of women. It’s also a call to action for equality in how women are paid, treated and their role in society. To celebrate, we’re featuring notable women all month—inspiring female adventurers, travellers, and activists who have a message to share.

On my first expedition, the timing was everything. Will Steger’s all-male 1985 North Pole team was training in northern Canada and they bumped into a five-foot tall, hair-to-her-butt female dog musher with a cast on her arm in the middle of nowhere. The case was from breaking up a dogfight. It blew their cookies… and opened their eyes to how tough women can be.

My climbing partner—he and I had just climbed Denali—knew a team member and he called to advocate for me. He was asked, “What’s she like when the chips are down?”

It was an opportunity and I grabbed it. I knew in my heart of hearts I would never forgive myself if didn’t put my foot in the ring. I didn’t think I’d get the job—I had never dog sled. Will said, “You can teach skills, but you can’t teach personality and group dynamics.” Dog sledding is relatively easy if you like dogs. But being immersed in -60°C weather takes both a certain temperament.

Will believed in me. But there were a lot of naysayers.

People would come up to me and say you’re too small, you’re going to be a liability.

I became the first woman to travel to the North Pole on an unsupported expedition. But that’s not why I went. I did it because from age ten I wanted to go to the top of the world in a dog sled. I come from a family that nurtured my whacky ideas. Even as a young girl, I would head into the hinterlands, and they would support me.

The expedition was successful. Then people called me a hero and role model, which was extremely uncomfortable. I hated the notoriety; I was introverted and shy. Then I reframed the attention. I felt responsible to the universe for being the first women to reach both poles. When I realized what a gift it was to be able to combine expeditions and education, I relaxed a little bit.

It is really important to me to have a purpose for my expeditions that are bigger than my personal ambitions.

Now, my classroom has five million kids. Thanks to technology, I can find intimacy with kids I don’t know personally.

On every expedition, the kids teach me something. Liv and I went to the Arctic in 2007. She froze her feet early on. We had to ski out. I was feeling very dejected. Kids who are travelling with you are invested in the trip as much as you in many ways. We were worried we failed them. Then, our website flooded with comments from students saying, “Don’t feel bad at least you tried, and most people don’t try.” The kids were reminding me of what really matters, and that the expedition is an ignitor.  We left the ice, but the kids kept studying the Arctic.

Kids help me make tough decisions. I might not back off when I should or I might not continue if nobody was watching. As a leader, I think a lot about who my audience is.

In the 1990s, I organized the first all-women Antarctica expedition.

We planned to pack out all our garbage, which no expedition had ever done. It was the decade of women and the environment. I remember thinking we’ll have no problem raising the money for the trip.

See Also: What Solo Travel Looks Like for Women in 2019

I spent four years and couldn’t get one corporate sponsor. ‘Suits’ asked me, “What if something happens to you? What if one of you dies?” Marketing directors said, “You intrigue us and our brands align, but we would be roasted if something happens so it would be irresponsible of me to sponsor you.” One guy squeezed my arm—he couldn’t conceive of me pulling a 250-pound sled.

It taught me a lot. We funded the expedition with grassroots support. We sold t-shirts, posters, and people donated who wanted us to make history. And we did. I look at a picture of the four of us—all under 5’5”–standing at the South Pole without a patch on our sleeves and so proud. It took me seven years to climb out of debt, but I even felt prideful about that.

Most things I do, I am learning as I go. My current project, also with Liv, is using access to fresh water as the umbrella for empowering women. We invested in six young women from around the globe. We’re travelling a major waterway on each continent every two years for the next decade, and on each continent, one of the young women is coming with us to be the continental ambassador. We’re bringing these young women because we’re also symbolically turning the work over to them.

In 2015, we paddled the Ganges. In 2016, we did the Yangtze. This year we’ll descend the 2320-mile Mississippi. Future trips include Africa in 2019, Oceania in 2021, South America in 2023, Europe in 2025, and Antarctica in 2027. We’re trying to illuminate stories of each waterway. We have a curriculum. When we meet people along our route we ask them, “What are you thirsty for?” We document their answers. We’re valuing the voices of women and girls. We want to transform as many people as possible in the next 10 years into agents of positive change.

We are using the river expeditions to help empower people, to help them find their voices and realize their potential. Empowered people can come together collectively to make meaningful, positive change, which is ultimately what Liv and I are thirsty for.

We have gone from isolation in polar regions to meeting with people along river shores as we travel. It’s so amazing how rewarding it is. And how much adventure there is on an urban river like the Mississippi. We get to talk about gender, the environment, politics and more.

Water is the medium pulling us from place to place. It’s not that different from a polar expedition—where it’s just frozen water. We take it one step at a time. That’s the basis of any expedition. You take one step at a time and 100 million steps later you’re across Antarctica.

You approach things differently as you age. Now that I am in my 60s, I am a little slower. I think as you get older you use the environment more wisely to get the job done.

Long expeditions taught me that if you don’t take care of yourself in the first half you won’t make it to the second half, and I think that’s true of trips and life.

When people find out that I am 62 but that by the time I get to Antarctica next I will be 72, that sort of throws them… and me too. I don’t think of myself as older all the time… I forget.

I am now looking at my work differently. I feel an urgency. I don’t have time to waste. My attitude is significantly different than even 10 years ago. I am very aware of staying healthy. I don’t want to blow out a knee.

I often get the question, “What’s left to explore?” I think there are a lot of firsts in a lot of different areas still to be had.

When you step out and pursue an objective, even if it’s been summited or touched before, you become an advocate for the area and the environment in a way the first explorers couldn’t.

We have access to technology like no other time in history. When you go out and do something you’ve only dreamed of, it’s still the first time for you…and it’s exciting.

Travel opens up whole other worlds, and people who travel have much more compassion and understanding of other cultures and other ways of doing things. When I was 11, my parents picked up my sisters and I and we moved to Kenya. I was old enough to remember the experience but young enough that I wasn’t afraid to go bounding off into the bush.

Living in another culture for a few years, shaped our entire family. I want all young people to have that experience. I am constantly asking myself how can I help young people travel in one way or other, through book, stories, or by literally getting into a canoe with me and Liv that will transport us to another place. As a kid, it made me hungry to see a new horizon. What if we could offer that to every person? What an interesting planet it would be.

Interested in seeing if you possess the grit for intense skiing or even a snowboarding trip in a destination of your choice? Simply looking to challenge yourself with a new adventure? Search for your next big bucket list experience on TourRadar. 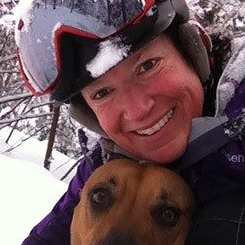 Berne Broudy @berneb is a Vermont-based writer, photographer, and adventurer. She can typically be found shredding, schussing, or splashing in some remote corner of the globe while documenting it.

After all the cancelled flights, postponed bucket list trips, and long...