On a walk along a one-time volcano crater in Laguna de Apoyo — a nature reserve located between Masaya and Granada in Nicaragua — I’m struck by the fleeting nature of human endeavours. This 200-century-old crater is nature’s giant bathtub, with cooling waters said to have healing properties.

From the mouth of the crater, I see glistening water meet the silvery sky, surrounded by tropical forests abutting the lake. The entirety of the area is covered in trails overrun by plants reclaiming the land. All of it has been here long before me, and will be here long after I’m gone.

I share these thoughts with my guide, Lorenzo Lopez, and he answers me knowingly. “I have much respect for these lands of my ancestors. Sometimes, I wonder if bringing travellers to these pristine spots hurts or helps. But when I see my community thriving thanks to tourism and the joy people experience from seeing my homeland, I think this is what they would have wanted.”

That night, I curl up in my tiny twin bed with the windows open, listening to the rustle of forest and the caw of howler monkeys as I drift off to sleep. I dream of the land and the ghosts of ancestors past, pleased to see I’ve come to discover their home.

Following the Nicaraguan crisis, and the local revolt against current president Daniel Ortega, the country has seen much of its tourism industry ravaged along its stunning coast. But on my trip earlier this year in January, Volcano Trail: Waves & Local Ways with G Adventures, I found an unrelenting resolve within many locals hoping to lift up their country through tourism.

Through its people, places and culture — the soul of Nicaragua reverberates from every corner of the country. What this little Central American nation lacks in a booming tourism economy, it makes up for tenfold in its spirit, natural wonders and great outdoors — proving the country forged from fire is an adventure-lovers paradise.

In Masaya Volcano National Park, I crawled on my hands and knees up to the lip of active Masaya Volcano, where craters spew smoke and gas. A walk along a moon-like terrain of lava rock and stunted shrubs will reveal the bubbling fire lake below, only seen during the darkest of nights.

Here, the stone under hand becomes hotter and each peak and rocky chasm appears purple from the glow of the rippled magma below. This land was aptly named “The Mouth of Hell” centuries ago, where indigenous people and Spanish conquerors lived in fear, as the volcano erupted several times throughout history.

There hasn’t been an eruption since 2016 and now, wildlife such as coyotes, iguanas and monkeys call this once desolate land home.

While Masaya is my first foray into the fascinating history of volcanoes, it won’t be my last, considering Nicaragua is known as “the land of lakes and volcanoes.” Nineteen active volcanoes stretch the breadth of the country, which originally called to my adventurous side when booking the trip — I wanted to see all of them. From the epic landscapes to the freshwater lakes, Nicaragua is a breath of fresh air with rolling green land not yet touched by development.

The morning I’m due to travel to Ometepe Island, the sky appears to be on fire. A melding of flaming orange, golden yellow and cotton candy pink, swirl together to create the most spectacular sunrise I’ve ever seen. Our Chief Experience Officer (CEO), Manu Saenz, looks over at me with a huge grin on his face. “It’s good luck,” he calls, “if the island is greeting you with that spectacular of a show, it must be pleased to see you.”

We board a tiny ferry, seeming to struggle against the weight of the large amount of people packed into such a small space. Though no one complains, considering our companions are one chatty group of locals.

We learn that the island is famed for its twin volcanoes, one still relatively active. When asked why they chose to stay when many families have emigrated to the mainland, they simply shrugged and stated “we thrive on the excitement.”

Once onshore, the one main street in town welcomes us with shacks painted happy shades of the rainbow and signs bearing an invitation to come in for a drink or two.  We press on, and make our way to the small rural village of La Paloma, where a tiny community centre is decked out in hand-knitted hammocks, picnic tables and a bar.

After a tour of the property, a short woman with silky black hair greeted me with a huge smile and introduced herself as Maria Theresa; she would be my host mom for the next three days. We walked up the dusty path, passing cheerful cottages all in a row, waving at the other villagers sitting on their sun-soaked porches.

We chatted like old friends, though neither of us were fluent in the other’s language. “I’m so happy you’re here!” said Maria Theresa. “We haven’t had any visitors in a year, it’s been very tough on our community. Most of us are single mothers trying to make a living for ourselves. We want to show our children the importance of community and taking care of one another, that’s our mission.”

The next morning, we set out to explore Ometepe. In the middle of the island stands the unmissable Concepción, an active stratovolcano that remains one of the tallest and most active of Nicaragua’s volcanoes. It casts a shadow over half the island with a large, dense cloud surrounding the peak.

Even though it’s an incredibly tough climb, taking over 10 hours to summit, Concepción remains the top tourist destination here, calling to the hearts of adventurers all around the world.

After a long hike, the best place to cool off is Ojo de Agua, a crystal-clear natural spring hidden in the jungle. Surrounded by plantain plantations and rugged scenery, I feel as if I’ve found my own hidden oasis in a place that can only be described as paradise.

Before dusk, I find myself barefoot, floating in the cooling waters as I watch the sky turn from pale blue to bright pink. I think back to all those whose paths I’ve crossed and how they have shown me that their country will not remain in an eternal slumber to tourism — much like their volcanoes — they’re simply reforging from the fire.

See Also: Tears, Toilets, and the Top of the World 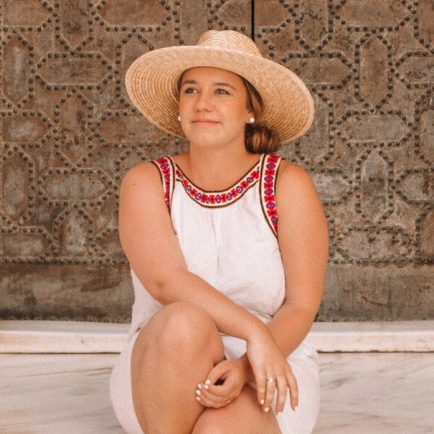 Megan is a seasoned travel, food and lifestyle writer. She's lived in Toronto, London, and Perth.

Last year, you just couldn't get enough of Europe! From looking...

Recently, it feels like all my travel articles begin with an...

7 of the Best Places to Experience Nature in Ibiza

7 of the Best Places to Experience Nature in Ibiza