I recently jumped on my first group tour ever – my destination of choice being none other than magical Morocco. Why Morocco you ask? I’ve always wanted to travel to this North African country for one very specific reason…the food.

While living in Brussels I had many Moroccan friends who often would delight me with some amazing traditional dishes and since that time, it became a goal of mine to make it to the country.

When you think of Moroccan food you automatically think couscous, right? That’s correct…. but there’s so much more to it!

I must confess at first I was a bit disappointed about breakfast. When I go on vacation one of the most exciting parts of my day is breakfast, long diverse breakfast buffets that basically entail eating for hours and hours. In Morocco breakfast is quite simple and even in hotels you won’t find a breakfast buffet. Instead you will have bread and Msemmen, the traditional Moroccan multi-layered pancake, accompanied by butter, jam, cream cheese, coffee, milk or tea and orange juice. In some places you will also enjoy broiled or fired eggs, accompanied with very salty black olives.

Salads are an essential part of the dining experience in Morocco. You’ll find a selection of salads at lunches which can be both raw and cooked. The former is made of finely diced tomatoes, cucumber, onions, green pepper and cilantro. Cooked salads, such as zaalouk, bakoula and choukchouka are varied in their components but are generally made up of vegetables and spices all cooked together in a pan.

Harira soup is a tomato-based soup with chickpeas, meat, lentils and noodles. It’s a culturally significant in Morocco, as it marks the breaker of the fast during Ramadan, which is consumed along with a date after a long day of fasting. On top of this, harira soup is a starter and a light snack on its own.

As a main course they have a wide variety of couscous and tajine. For the uninitiated, tajine is a meal cooked in a tajine (ceramic pot shaped as a cone), traditionally filled with meat (lamb, chicken, camel) but nowadays you can also find it made of fish, octopus or only vegetables, so vegetarians can get involved in this delicious meal.

Couscous (so good they named it twice) is prepared similarly as tajine, in that it can be cooked with meat or vegetables. Both are richly seasoned with sweet flavours – raisins, beans, fava beans, chickpeas, and spices like cumin, paprika, turmeric and pepper.

Skewers are also very popular with french fries if you want something lighter and more “European”. Kebab-style barbecuing is the most common style in Morocco, called “meshwi”. They’re typically eaten in sit-down restaurants and hole-in-the-wall grill shops, where you can even bring your own meat purchased from a butcher. Either way, they’re a great inexpensive but delicious food option.

There is a traditional dish from Fes that was a surprise for me: Pastilla. It’s a kind of pie made with filo pastry, chicken, almonds and decorated with sugar and cinnamon on top. It’s crispy outside and soft inside and absolutely phenomenal. It’s easily mistaken for a dessert but is typically served as a main course, which is Andulasian by origin but proudly claimed as Moroccan for perfecting the dish as it’s known today.

This may be a no-brainer but the best fish and seafood can be found near the sea. We had two full seafood days in Essaouira where we tasted everything from freshly caught fish, cooked in a local small restaurant the same day it was caught to a fancy seafood restaurant where some of us even had oysters.

Despite my wildest hopes, Moroccans don’t eat super sweet foods for dessert! Instead the fruit that you didn’t have at breakfast you can now have as a dessert. Orange with cinnamon or fruit salad are the most common “desserts.”

Black, green, yellow, pink olives and more olives! Olives galore! You can enjoy olives with breakfast, as a snack, as a starter…just always. It was a joy to my eyes to see them piled up in the souks (markets) seasoned with olive oil, herbs, paprika or other spices. If you’re hungry on-the-go you’ll also want to try some dates. They can be found everywhere, from markets to restaurants, even in gas stations!

Mint tea, jokingly referred to as ‘Moroccan whiskey’ is the national drink of Morocco and this is no exaggeration. They drink it in the morning, with snacks and with practically every meal of the day. The traditional tea is sweet and needs to be served once, put back in the kettle and served again, lifting the kettle as much as possible while its poured. Interesting fact: the reason they serve tea from up high is so that it gets a frothy and foamy top!

The second most popular drink is coffee – which helps any European feel at home. They drink espressos as much as we do in Portugal or coffee with milk called Nous Nous (half half). Visiting cafes in Morocco is a male-dominated activity, but this is a little more equal in bigger cities.

Other than tea, orange juice is a super popular choice of beverage as oranges are grown in Morocco.

Bonus tip: Alcohol cannot be consumed in public and is only sold in places with authorization, so most hotels, bars and some restaurants.

Are you a vegetarian?

Never worry! Moroccan people eat a lot of vegetables and eggs, so any vegetarian should be fine in Morocco. You will often find omelettes as a main course option in most restaurants. They have a special and delicious Berber omelette – eggs poached in a tasty sauce made of tomatoes, onions, spices and peppers. It is also common to find vegetarian couscous or tajine.

Lentils are used a lot for soup or salads. In general, you can find many types of different delicious fresh salads. Rest assured my veggie friends, you won’t get bored (or go hungry) in Morocco!

Carla travelled around Morocco in 2016 with Intrepid Travel. 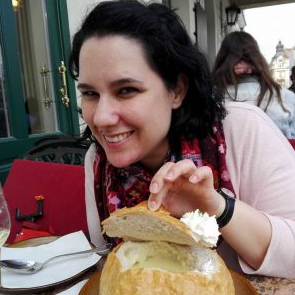 Like her Portuguese compatriots, Carla loves to explore the world in search of new adventures, new cultures and to experience the local food. After working in hotels, airlines and cruise ships, she found true love in group touring and will make you discover the world with her! Carla is based in Vienna where she moved to follow her other true love.

How about going on a foodtastic trip? We’ve served up some...

How Well Do You Know Aussie Slang?

How Well Do You Know Aussie Slang?