Sicily Vs Sardinia: Two incredible Italian islands in the Mediterranean, but which one will you choose for your next tour or solo adventure? We’re sure you’ve heard everyone raving about the perfect white beaches of Sardinia (because they really are amazing), and perhaps the secret is out about the charming villages and delicious food of its friendly neighbour, Sicily?

From spectacular ocean views in every direction, food and wine to make you weak at the knees and buzzing capital cities, it’s fair to say that Sardinia and Sicily share similar traits.

With both islands in such close proximity to mainland Europe, the only question for you is which one should you choose for your well-earned vacation?

Feeling inspired to start the adventure? Take a look at the most popular tours travelling to and through Italy.

Perfectly placed in the heart of the Mediterranean, Sicily has been seducing visitors for the longest time. Charming villages, ancient ruins, grand cities drenched in history, beautiful beaches and a cuisine that is flavorful, fresh and unique, what is it about this island that keeps travellers returning for again and again?

The capital of Sicily: Palermo

Palermo is a city with attitude. Best described as noisy, fast, a little grim and chaotic, however, somehow it just works. The best thing to do on a visit here is to just wander around and explore the disorderly crumbling architecture, meander through the boisterous food markets to appreciate the incredibly fresh seafood and fresh produce on offer.

Did we mention that Palermo has some of the best street food in the world?

My favorite thing about Sicily is really the culture and the idea that it seems to be much less stressful than it is in the United States. I spent some time there in the summer of 2016 when I wrote my book Forty Days in Italy on La Mia Famiglia. I spent time with my family who I never met before and they were just very relaxed. They weren’t in a hurry, the pace was slow, and they enjoyed life, and I found that to be a really great thing about Sicily, that makes me want to go back. That mindset is really powerful.

The region of Siracusa is a beautiful area and a lot of people I know tend to gravitate towards Agrigento and Palermo, and those are beautiful as well, but I can tell you that Siracusa is amazing. My family lives there and there are some great places you can visit like Noto and different beautiful beaches. My family is from the small village of Sortino. Siracusa is a great part of Sicily, that I think a lot of people don’t think of first when they think of Sicily. One activity we enjoyed was climbing to the top of the volcano, Mount Etna. It was a beautiful view. We took my kids up there and from the top, you have a really spectacular view of Sicily. – Anthony Fasano, The Italian American Experience

As Sicily’s second-biggest city, Catania is full of energy and draws visitors in with its youthful atmosphere, trendy restaurants and cool alternative bars. The historic centre of the city is UNESCO World Heritage site.

This area is visually grand, with huge black and white marble buildings and churches towering over the many squares and avenues. The city is watched over by the spectacular Mount Etna, an active volcano with trails leading to the summit.

If you’re close-by Catania, you must visit the stunning hilltop town of Taormina. Spectacularly positioned on the side of a mountain, this is Sicily’s most popular (and most expensive) Summer destination.

Enjoy warm evenings in one of the many super cool outdoor bars, snacking on aperitivo and Aperol spritz whilst watching the world go by.

Located on the Ionian Coast of Sicily, this charming city is known for its rich Greek history and ancient ruins. This includes a historic Greek theatre where plays are still performed and an extensive archaeological park.

Syracuse is a pretty labyrinth of cobbled streets surrounded by Roman, Greek, Baroque and medieval buildings and impressive boulevards.

Look out for tasty arancini balls from small eateries and the world famous lemon granita!

Located off the big main island of Sicily, these volcanic islands all have their own individual personality, however, they are all pricey to visit.

But don’t let that stop you, because we think they’re certainly worth it. Almost all visitors to the Aeolians come by sea. The major point of departure is Milazzo on the Sicilian ‘mainland’. It’s here that you’ll find regular year-round car ferries and hydrofoils to get here.

Be sure to drive around and explore gorgeous tiny villages surrounding this massive volcano. We’d recommend that you stop to buy a bottle of Nero d’Avola wine (grown in this region and absolutely delicious red wine) and pair it with some fresh Italian bread and antipasto that you can pick up from any town, then treat yourself to a picnic in the Mediterranean sun.

See Also: We Rank the Best Islands in Europe for Every Traveller

What you need to know before you go to Sicily

There are a number of reliable ferry and hydrofoil options that run from Milazzo to the Aeolian Islands.

Sardinia, a perfect paradise, positioned in heart of the Mediterranean. It is here that you will find the most spectacular blue waters and white sandy beaches you’ve ever seen. As close to North Africa as it is to the Italian mainland, Sardinia is one of Italy’s top summer destinations.

Aside from world-class beaches, Sardinia welcomes visitors with wild and rugged hiking trails, awesome diving spots for the adventure seekers, a good dose of Roman ruins as well as some incredible cuisine to keep food lovers smiling for ages after they’ve left.

I’m a big beach/sea girl (hence currently living on a Thai island), so I loved the amazing beaches and smeralda water off the Sardinian coast. I especially loved renting a small boat and cruising around the Golfo di Orosei. The color of the water was truly incredible and these small beaches were way less crowded (even during the high season) than Spiaggia della Pelosa for example. If you’re a first time traveler to the island, I wouldn’t miss hanging out in Cala Gonone and exploring the nearby beaches along the gulf there. – Michelle, Mishvo in Motion

The capital of Sardinia: Cagliari

This smooth yet unpretentious city is positioned in a curved bay in Sardinia’s south. If shopping is your thing, enjoy the many stores located in leafy tree-lined boulevards and chic arcades. Look forward to top-notch dining options and trendy bars for evening entertainment.

Everywhere you go in this trendy city, you’ll come across bits left from its rich history: centuries-old churches and museums filled with prehistoric artefacts and ancient Roman ruins and stylish buildings.

The main tourist town in the northwest is an appealing port of call with a centre that’s a maze of medieval cobbled stoned lanes, squares and Spanish-style buildings that buzz with life.

Check out the sand coloured sea walls of Alghero, and stop to enjoy drinks and relaxing sea views from here.

Famous underground stalactite caves located near the town of Alghero, Neptune’s Grotto was discovered in the 18th century when a local fisherman from Sardinia spotted an opening in a cliff while fishing off the coast.

The entrance to the grotto lies only about a metre above the sea level at the foot of huge cliffs, the cave can therefore only be visited when the waters below are calm.

To reach the grotto, you have two options. A stairway cut into the cliff leads you about 650 steps from a car park at the top to the entrance. It’s also accessible via a short boat trip from the port of Alghero.

The housing complex where Giuseppe Garibaldi, the hero who led several military expeditions fighting for the unification of Italy once resided is now the Garibaldi museum.

The museum is surrounded by vegetation and granite rocks typical of the island of Cabrera, and overlooks the perfectly clear waters of the archipelago of La Maddalena.

The town of Castelsardo is a quaint medieval village, just oozing charm and history. At the top of the village is Doria Castle, which is the focal point of the village.

A megalithic complex built by the Nuragic people 3,500 years ago, which served as a fortified dwelling against invaders. Super cool!

Beaches…are everywhere! Here are a few of our favourite spots:

What you need to know before you go to Sardinia

Useful Phrases and Words in Italy

Where will you go? Sardinia or Sicily? 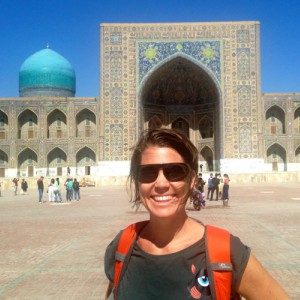 Rach is a self-confessed food traveller. When she’s not searching for the best food experiences around the globe, you can find her chasing the sun, taking road trips in her camper-van or chowing down on the best eats around Melbourne. You can follow her adventures on Instagram @veryhungrynomads, Twitter @veryhungrynomads and Very Hungry Nomads

Camping in Iceland: Rules, Packing Tips and Everything You Need to Know

Camping in Iceland: Rules, Packing Tips and Everything You Need to Know