If the world was a classroom, then Japan would be the cool, smart, good-looking kid who everybody loves. Completely un-arrogant despite her beauty and poise, we all want to hang out with Japan, because there’s just something about her we find so cool and fascinating.

The Land of the Rising Sun is a contrasting spectacle where ancient history intertwines with futurism; one where geishas walk the streets of Kyoto and karate masters teach students the art of combat and discipline, a place that is equally described as a tech-head’s paradise and a culture vulture’s nest. It’s where time stands still, yet everything moves at the speed of light in futuristic Tokyo. How do you explain or describe Japan to someone who has never been there before? Quirky? Traditional? Polite? Ragingly good fun?

She’s all of this and more, and one of the best ways to watch her shapeshift before your eyes is to jump on a scenic train ride. So leave behind the neon lights, grab your Japan Rail Pass, sit back, and prepare to take the most scenic journey of a lifetime….

Wake up early and watch Tokyo come to life with a hot cup of coffee. Cut through the crowds of impeccably-dressed men and women on their way to work, and catch the Nagano Shinkansen train from Tokyo to Nagano. Once there, hop aboard the Nagano Electric Railway’s Snow Monkey Express, watching the calm countryside pass by your window before arriving at a series of onsens (Japanese hot springs) where lo and behold, dozens of red-faced snow monkeys are chilling out, bathing in the steaming springs.

Most Scenic Train Trips Around Japan – #2. Ride the Sanriku Railway

The best way to see the Tohoku coastline is onboard the Sanriku Railway. Japan has beautiful, deep-blue oceans which strangely, don’t get the recognition they deserve (Google ‘Okinawa’ if you don’t know what I’m talking about). Relax and let your carriage window show you large mountains, epic cliff drops, and giant boulders emerging from the ocean floor as you see the country’s natural beauty. Although amazing all-year ‘round, if you can manage to see it in fall, do: the amber forests contrast beautifully with the rugged coastline below.

The fastest way to get there: Get the bullet train to Morioka from Tokyo (14,230 yen), which is a beautiful journey in itself. From Morioka station you have two options depending on how you wish to experience the sublime scenery: you can use your JR pass or rent a car. If you’re over trains by the time you arrive at Morioka, then a car is a great way to explore the Tohoku coastline as a mini road trip, otherwise catch the bus from Morioka station to Miyako, hop off and catch the Sanriku Northern line to begin your journey (part of the Southern train route is still closed due to damage from the tsunami).

Need to relax and get away from it all? Want to disconnect after a few nights in Japan’s crowded cities? The Hakone Tozan Railway is zen on wheels: in the fall, ruby foliage and golden leaves will have you thinking you’ve entered a movie set. A world away from the bright lights of Tokyo, climbing the steep terrain of Mt. Hakone is one experience you shouldn’t miss, especially since you’ll be greeted with one of Japan’s most famous sites: Mt. Fuji. Hop off the train and right into one of the onsens nearby, and feel truly Imperial as you soak up the views.

The fastest way to get there:  Ditch your Japan Rail Pass for this one folks, and take the Odakyu Railway from Tokyo‘s Shinjuku Station to Hakone-Yumoto Station. For 2,080 yen, take the “Romance Car” limited express for an 85-minute journey through some of Japan’s most stunning scenery.

Most Scenic Train Trips Around Japan – #4. Ride the Oigawa Railway

A traveller’s favourite: Jump onto one of these old-school trains which resemble something between the Hogwarts Express and a steam locomotive that you’ve seen in countless films about WW2. Although you won’t end up with Ron and Harry, you won’t be shipped off to war either; instead, you’ll be transported through dense forests, pushed along bridges suspended above mountainous mint and chocolate terrain, and propelled forward to the picturesque Sumatakyo Valley, an area of unsurpassed serenity.

The fastest way to get there: Take the bullet train from Tokyo station to Shizuoka, and then change train lines to JR Tokaido and head to Kanaya station. Take the train from Kanaya to Senzu where you can then catch the Oigawa railway for 800 yen, or relive your childhood dreams by taking the Thomas the Tank Engine or James the Red Engine for 1280 yen.

A scenic ride through Japan’s mountains at any time of year is the perfect way to gather a well-rounded perspective on this dynamic country. From the pulsating international business hub of Tokyo, to the foodies paradise of Osaka, all the way through to sipping sake in the mountains and hiking through kaleidoscopic bamboo forests, if Japan’s not at the top of your travel list, it should be now! 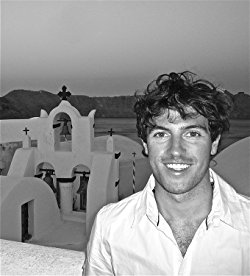 “Travel isn’t a phase, it’s a lifestyle”, was a term coined by Anthony while publishing his backpacking adventure, Vagabond. Travel-obsessed, his search for cultural authenticity and world education has taken him to some 40-odd countries.

When you’re ready to book your next holiday, what type of...