So, you have one week to travel, and want to experience something unique? You’re looking for adventure, culture, spirituality, and mouthwatering food – all in one destination and all available in just a week. There are dozens of places you could go, but none will be as magical as a one week trip in India exploring the Golden Triangle.

From the Taj Mahal to Hawa Mahal, India is home to some of the world’s most impressive architectural achievements, spiritual sites that will inspire you, and food that will make your palette crave more. When it comes to travel, India is a place you’ll visit once and forever find yourself wanting to return. Here’s what you can experience travelling around the country’s beautiful Golden Triangle.

October to March is widely considered the best time to visit India thanks to its moderate temperatures and higher chances of dry weather.

Someone who has always been curious about Indian culture but never had the time to visit. This person loves bright, vibrant, and unique experiences. They are in touch with their spiritual side and love exploring new ways to connect with people and their surroundings. This person has a travel bug and relishes in learning and discovering new things.

Start in Delhi, end in Varanasi.

Delhi, the third largest city in the world and the capital region of India, is a massive metropolitan area in Northern India. This region includes Old Delhi, a neighbourhood where the history dates back as far as the 1600s, as well as New Delhi, an urban district that serves as the country’s capital. This giant city has no shortage of vibrant activities to choose from, boasting an overwhelming amount of things to see and experience, from food, temples, markets, culture, and historical landmarks.

Pro Tip: The public transportation in Delhi is clean, efficient, and affordable. From the Metro to Hop-On-Hop-Off buses, you can save a lot of money by opting for public transit over taxis.

The next stop on your tour through India’s Golden Triangle is the city of Agra. This destination is known for being home to one of the Seven Wonders of the World, but it offers so much more than the beautiful Taj Mahal. After wandering through the ancient streets, dining in its charming restaurants, and touring its shrines, temples and gardens, you’ll quickly learn why this city is so easy to fall in love with. Make sure your camera is fully charged because this city is filled with stunning Indian sites that you’ll want to capture.

Pro Tip: Set your alarm clock early and get to the Taj Mahal for sunrise. Not only will you beat the heat and the crowds, you’ll also be able to enjoy the beautiful mausoleum as the sun begins to rise.

Up next is Jaipur, also known as the Pink City. This city is enthralling – it overflows with a rich, royal history and is often thought to be India’s most flamboyant state. The chaos is both colourful and majestic, bringing about a fast-paced environment that pushes you into the adventure. It’s also a shoppers paradise. Here you can find dozens of different handmade crafts, jewellery, fabrics, traditional textiles and artwork, even carpets. This is one of the best places to find authentic Indian souvenirs, so don’t forget to explore the shops.

Pro Tip: Carry a bit of cash with you as you never know when a crafty street vendor or shop will catch your eye. While some stores take debit or credit, it’s a good idea to have cash on hand in case you fall in love with something a smaller, more artisanal vendor is selling.

While Varanasi isn’t typically considered part of the Golden Triangle, a week in India wouldn’t be complete without visiting the country’s spiritual capital. Each year, thousands of Hindu pilgrims travel to Varanasi to bathe in the sacred flowing waters of the Ganges to rid themselves of sin or to perform funeral rites. This river is an extremely sacred part of the Hindu religion and is considered one of the holiest rivers in the world. This city provides a deep connection to faith for many, making it a very calming and peaceful space, even for those of different beliefs. Along with the Ganges, Varanasi is also home to over 2,000 temples, each one of them unique.

Pro Tip: When visiting temples or places of holy significance, be sure to dress modestly to show respect for Indian culture and faith. It’s a good idea to keep your shoulders covered and remove your shoes if you are asked to do so.

India is one country that is truly capable of creating an experience you can’t find anywhere else in the world. The architecture is splendid, the day-to-day culture is lively, and the spiritual customs are moving. If you’ve got a week to travel and you don’t know where to go, India will feed your wanderlust. 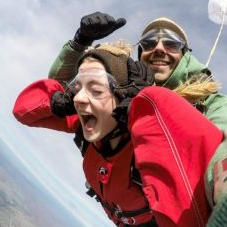 The Best Places to Camp in Namibia

The Best Places to Camp in Namibia